The weather is finally supposed to be really nice this weekend here in the PNW, which means that everyone will be outside trying to get lots of Vitamin D built up in the next few days.  And while grilling is a favorite way to prepare a meal when the weather gets nice, it can sometimes be a little much to serve hot food when you’re working on getting acclimated to the first real warm days of the season.  A nice alternative, especially for lunch on the porch on a hot afternoon, is a chilled salad with plenty of meat mixed in.

This recipe came to us from a friend, Amy, at the gym – whose husband Brad is also one of the trainers.  She had adapted it from a recipe of a friend of hers, eliminating the original recipe’s brown sugar, fried won tons, and soy sauce in favor of some less problematic ingredients.  Of course, we made a few adjustments of our own…but mostly based on what we had on hand at the time.  Get this made up just after breakfast so it has a chance to sit and chill in the fridge until lunch – letting the flavors mix and mingle a bit before eating.

Mix the coconut aminos, water, vinegar, oil, red pepper, and sesame seeds together in a small prep bowl.  Whisk to combine well, then set aside.  Next, get the chicken cooking (if you don’t have a pre-cooked chicken).  You can either boil the chicken in a large sauce pan, or grill it, or pan fry it – anything to cook it all the way through without wasting a lot of time.

While the chicken is cooking, get the rest of the veggies cut up.  Put everything in a large mixing bowl (this one should be getting familiar by now to our regular readers).  When the chicken is cooked, let it cool for a bit and then shred it into bite-sized chunks using a fork and your hands (or a semi-sharp knife).  Let it cool a bit more before continuing (you don’t want it so hot it wilts the veggies when you add it to the salad). 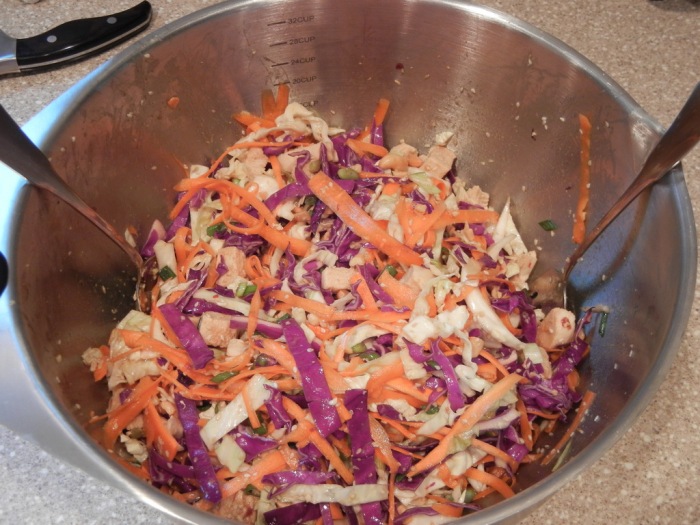 Whisk the dressing once more to fully mix, then add to the bowl of veggies.  Add in the chicken as well, and toss everything to coat.  Cover and place in the refrigerator for several hours to let all of the flavors blend.  Immediately before serving, add the cashews (to keep them crunchy) and toss one last time.  Dig in!