Our recent CSA share included a bunch of radishes (which were nice and spicy) and I wanted to do more than just slice them up for a salad.  I came across a recipe for sauteing them along with some chicken, and serving with tarragon and mustard that gave me some ideas to start playing a little.  Here are the results, which let you savor the taste of the sautéed radishes both alone and accompanied by a thick reduction of mushrooms, mustard, tarragon, shallots, and sherry – all over top simple pan-browned chicken breasts.

Start out by melting 2 tbsp coconut oil in a large skillet over medium-high heat.  Set the oven to “warm” as well.  Cook the chicken until browned on both sides and just cooked through – about 5 to 8 minutes each side depending on how thick the breasts are.  When done, transfer to a plate and place in the oven to keep warm.

While the chicken is cooking, get the other ingredients prepped.  Trim the tops off the radishes (chop up and put in your salad), leaving about a half inch still on the radish.  Split them in half lengthwise and place in a prep bowl.  Slice the mushrooms and place in another prep bowl, then chop up the shallot and tarragon and separate those as well.  The mustard isn’t shown, but it can be measured out now (or simply measured when needed). 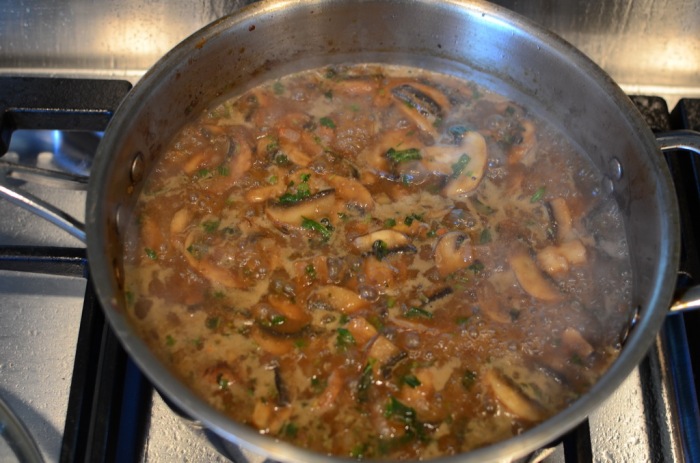 With the chicken done, it’s time to make the sauce.  In the same pan (over the same heat still), add another tablespoon of coconut oil.  Throw in the mushrooms and sauté for about 3 minutes, then add the shallot for an additional minute.  Pour in the wine and broth and bring to a boil, then whisk in the mustard and tarragon. 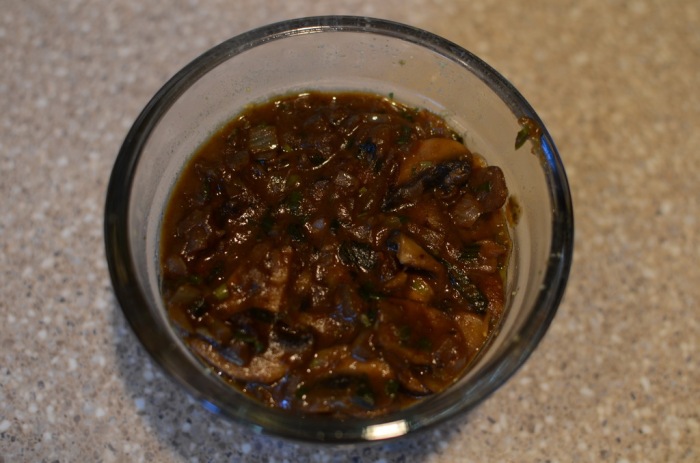 Reduce heat slightly and maintain a low boil for about 10 minutes until the sauce becomes a thick reduction.  Transfer the sauce to a heat-safe prep bowl – using a silicone spatula to scrape out the pan as much as possible – and set aside.

Finally, melt another 2 tbsp coconut oil in the skillet with the heat turned back up to medium-high.  Once the oil is hot, place the radishes in the pan with the cut side down and let cook for 5 minutes without stirring (this will brown the cut sides pretty well).

Continue cooking – stirring occasionally – for another 5 minutes until they are crisp tender and just a little crispy on the outside.  Transfer to a small serving bowl.

Pull the chicken out of the oven and slice the breasts across into 3/8″ thick slices.  Arrange a serving of chicken on each plate.  Add some radishes over the chicken, and top the whole thing with some of the mushroom tarragon sauce.  Accompany with a salad using your radish greens – wash the greens well, chop them up coarsely and toss in with your other greens, only go with just a few for your first salad as they can have a bit of a bite to them.