Recipes posted a year ago:

This recipe came about while we were recently on vacation in sunny Arizona (where we were able to get plenty of Vitamin D).  We had the opportunity to spend a week with Karen’s parents in a vacation condo – which afforded us the chance to cook our own meals instead of spending a week eating at restaurants.  We made a point to bring a handful of different spices with us, and then made a stop at the local grocery store as soon as we had checked into our condo to stock up the fridge.  After a lazy morning followed by an afternoon at the pool, we threw this together in just a short time (aside from the time in the oven).

Preheat the oven 400 degrees. Arrange the chicken pieces in a deep medium-sized casserole dish so that the legs set on either side of the breast. Sprinkle the basil ribbons over the chicken breast, and then the tomato halves over top.

Combine the garlic, shallot, olive oil, vinegar, and seasonings in a small prep bowl and whisk to combine. Place the squash in a mixing bowl large enough to hold it (with room to spare), then toss it with the oil dressing mixture.

Pack the squash over and around the chicken.  Cover with a lid or foil and place in the oven.  You could insert a meat thermometer into the chicken breast so that it is just short of touching the breast bone (we didn’t have one with us on vacation).  Set the timer for 45 minutes.

Check on things when the timer goes off, but continue cooking until the thermometer reads 165 degrees (or you can cut into the breast and make sure it is cooked through).  This should take between 1 to 1-1/2 hours.  The squash will also be tender and starting to brown as well. 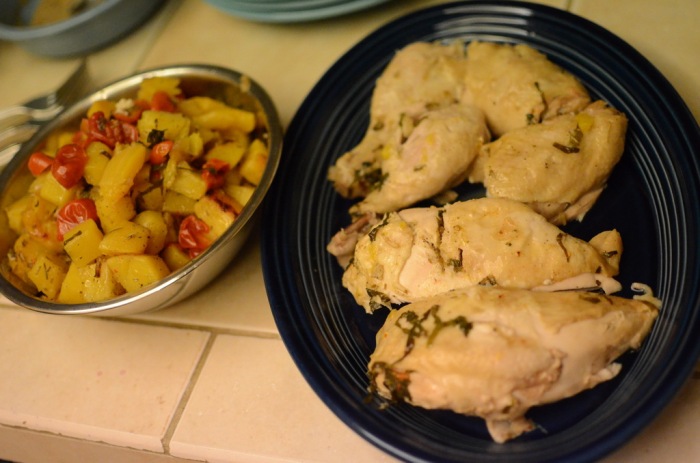 Spoon the squash and tomatoes off into a serving bowl, then remove the chicken and carve it into individual cuts and arrange on a serving platter.

Dinner is served! And as a side note, I also think this dish would work great in a slow cooker – just keep the cooking temperature on low and let it go for several hours instead.  Give it a try, and let us know…