This recipe started out inspired by a dish called laksa that comes from Malaysia and Indonesia.  Traditional laksa is a spicy noodle soup, of which there are numerous local incantations involving either curry or tamarind for flavor, and a greatly varied list of ingredients such as tempe, boiled eggs, poached fish, rice noodles, bean sprouts, and shrimp paste.  Of course, just like a Hollywood movie claiming to be “inspired by a true story” (we know how close they stick to the facts in those, don’t we), this recipe evolved into a loose interpretation of traditional laksa that is definitely Purely Primal.  And don’t be scared away by the long list of ingredients either – this one is simple to put together, and doesn’t take very long either. 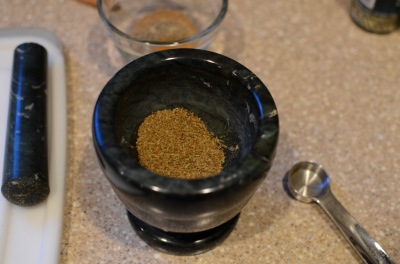 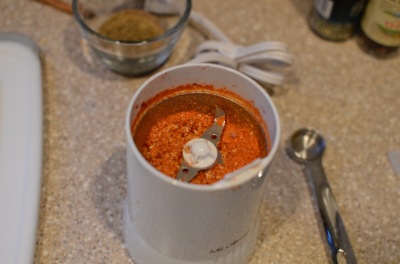 Start out by prepping the spices.  Combine the cloves, cumin seeds, and fennel seeds in a motar and pestle (or a spice grinder if you like) and grind to a coarse texture.  Transfer to a prep bowl with the coriander seeds (if you have whole coriander, grind them too), black pepper, and turmeric.  Grind the arbol chiles up to a coarse powder as well (this time, even I resorted to the spice grinder), then combine with the other spices in the prep bowl.

Here’s a time when I’m going to show you a picture of what I did, and then tell you to do something different (you’ll see why later).  This picture shows the lemongrass cut into ~1″ long pieces and then mashed up in the mortar and pestle.  This would be great for making tea…not so great for soup.  Instead, trim the outer layer or two from the lemongrass stalks and trim off the dried up ends.  Then use a mallet or the pestle and mash the stalk against a cutting board so it is flattened and split, but remains full length.  Set aside.

Heat the coconut oil in a large sauce pan or stock pot on medium heat.  Add the chicken, shallots, and spice blend and begin cooking and stirring.  After about 2 minutes, add in the fish sauce, then cook for an additional 3 or 4 minutes until the chicken is just starting to brown but still pink in the middle. 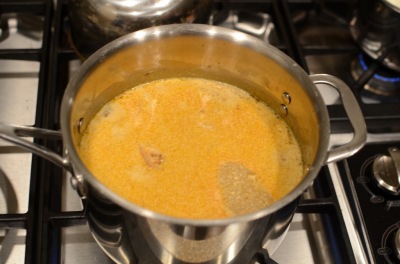 Pour in the coconut milk, chicken broth (ours was still frozen – you can see the block in the lower right), and salt.  Toss in the cinnamon stick and mashed lemongrass stalks and give everything a good stir.  Bring to a boil (if your stock was frozen, this will take a little longer), then cover and reduce heat to simmer.  Continue simmering for 20 minutes until the chicken is fully cooked.

When it has finished simmering, remove from heat and remove the cinnamon stick and lemongrass (this is where you’ll be glad you left it more-or-less whole).  Stir in the cilantro and basil leaves and let stand for just a minute or two. 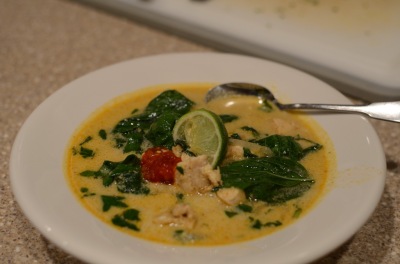 To serve, ladle a good-size portion into a shallow soup bowl.  Squeeze the juice from a lime wedge over the top, then set the lime on top for garnish.  If you like lots of heat, drop a spoonful or two of Sambal oelek on top as well (stir it in before eating) and bring to the table.  You could even arrange a little fresh mint or cilantro or basil sprig on top if you want to be fancy.

This soup has a great mix of flavors with the curry (turmeric) only making a mild showing in the color and aroma – very different from many Indian curries we’ve tried and made.  And we’ve kept the base soup from being too spicy (for the kids’ sake) by limiting ourselves to the five ground chiles in the ingredients above.  If you want to turn up the heat a bit more before adding the chili paste when serving, then up your number of ground chiles to 8 or more.